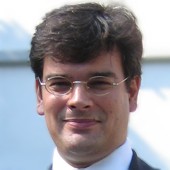 Marc-Andre is the CEO and founder of eGenix.com, a Python-focused project and consulting company based in Germany. He has a degree in mathematics from the University of Düsseldorf.

His work with and for Python started in 1994. In 1997, he became a Python Core Developer. He designed and implemented the Unicode support in Python and continued to maintain the Python Unicode implementation for more than a decade, after it first appeared in Python 2.0. He also authored the well-known mx Extensions, e.g. mxTextTools, mxDateTime and mxODBC, which are now distributed and maintained through eGenix.com.

Marc-Andre currently is Chair of the EuroPython Society (EPS) which organizes the EuroPython conference series and support the Python community in Europe.

He is also a founding member and Fellow of the Python Software Foundation (PSF) and has served on the PSF Board several times.

Today, Marc-Andre spends most of his time consulting and managing large-scale customer projects heavily relying on Python and databases. More details are available on http://www.malemburg.com/.